The envelope on the left is addressed to Mr. John Hewitt, West Winsted from his son, Charles Hewitt, a member of the 7th Regiment, Co. E, stationed at Port Royal in August 1862.

The Soldiers' Monument Commission release a newsletter on our website
every May and November to acquaint our friends and visitors to  behind-
the-scenes happenings. We offer the latest in the current research of
Winchester in the Civil War and of the ongoing research on our
Monument and Park dedicated to those brave men who answered the call of their nation.

In addition, we will update you on our upcoming events, describe past events, occasionally issue requests for volunteers and let you know how you can help us in our continuing mission of preserving the Soldiers' Monument and Memorial Park for future generations.

TREE LIGHTING CEREMONY INFO REQUESTED
According to veteran Soldiers’ Monument Commission member, Jack
Bourque, the first Christmas lights were put on the monument by nearby resident Don Kolosky. He thinks it occurred  in the mid 1970s since he does remember writing about it as a reporter for The Courant in the 70s. He further stated that “over the years, we have had Santa visit the monument and held an open house for children.”

He reminisced about one year holding an official lighting of the tree ceremony, “the fire department truck – I think it was the ladder truck – brought up Santa to the monument.  We conducted this lighting in conjunction with the Recreation Department.  When Santa arrived he “flipped the switch” that turned on the lights on top.  Then he sat in a chair inside the monument near the fireplace and children came in one at a time, sat on his knee in the traditional way, parents took pictures and then as the child left the monument, they were given a small gift.  It was a beautiful opportunity to use the monument and  tree lighting.  What I also recall was it was also difficult for the fire department’s truck to do the turn around and of course parking was difficult.  I believe we did this on the Friday after Thanksgiving.” He added “maybe others have more recollection about this, but I think we only did it one year; I don’t recall why it wasn’t continued.”

The Soldiers’ Monument Commission would like to re-start this event in
2014. Does anyone have any memories or photos of the past event(s)? If so, we  would be grateful if you would share your stories/photos with
us.

Please send or email any info to:


Our tree on the top of the monument will be lit this year shortly after Thanksgiving and will remain lit at night for the duration of the holiday season. 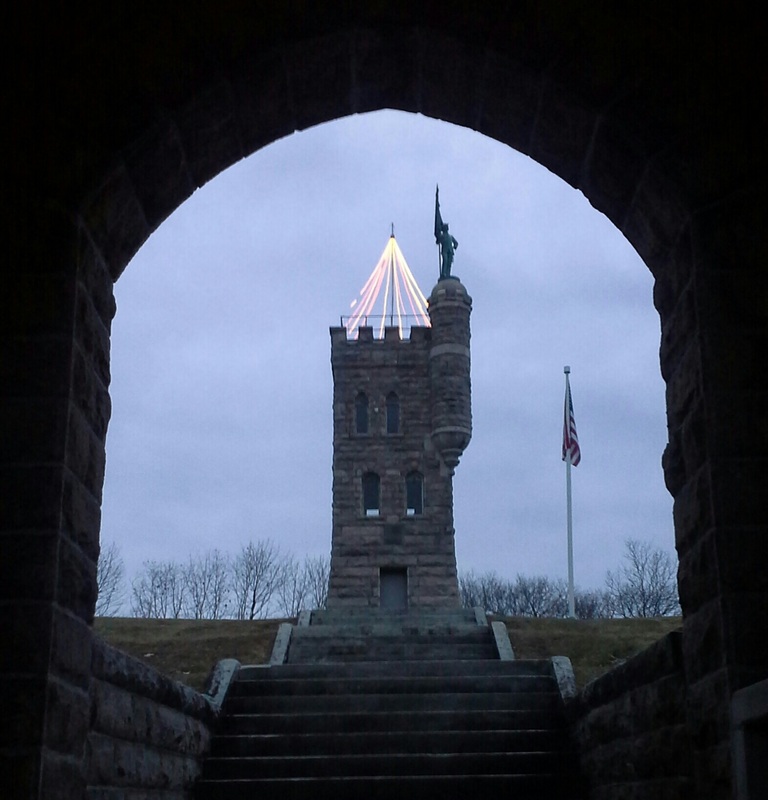